A Helfrich Outfitter LLC is owned and operated by Aaron and Jonnie Helfrich. Aaron was raised in Springfield, Oregon and is a third-generation fishing guide and outfitter.  Jonnie was raised in Portsmouth, Virginia and has paddled since 1963, guided since 1976.

They met in 1988 on a river trip on Idaho’s Middle Fork of the Salmon.  Aaron was one of the guides who ran raft support for Jonnie and other members of her canoe club.  On that trip, they recognized in each other a mutual love of rivers and the out-of-doors and similar aspirations for their lives.

Five years later, they married.  Four years after that, two children were on board.  They both couldn’t work summers in Idaho, so they created A Helfrich Outfitter LLC, a whitewater rafting and fishing business based closer to home on the McKenzie River. 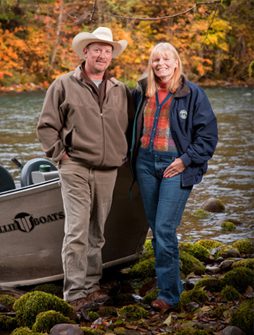 A Helfrich Outfitter, LLC is an equal opportunity employer and a permitted outfitter under the National Forest Service and the Bureau of Land Management. 1950 Yolanda Avenue Springfield, OR 97477 | Contact Us